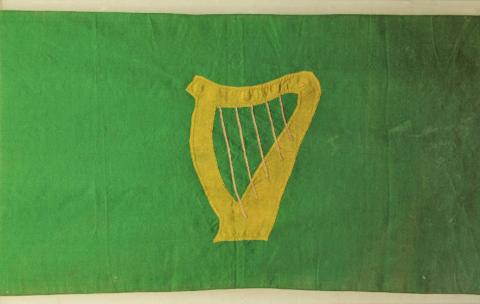 A flag which was flown over Liberty Hall and later found in the ruins of the building has been returned to Dublin on loan from an Enniskillen museum.

Research and analysis carried out on the uncrowned green harp flag has confirmed that it is the same one that James Connolly had asked to be flown over Liberty Hall on Palm Sunday, exactly a week before the Easter Rising.

Rachel Phelan, a textile conservator who worked on the flag’s restoration, said that the colours of the irreplaceable artefact ‘are as strong as 100 years ago and the flag would have been clearly visible in the [Dublin] quays.’

Retrieved by Royal Inniskilling Fusilier, Acting Corporal John McAlonan from the ruins of the former Irish Citizen Army headquarters, the flag was given to the Inniskillings Museum in 1935.

It has now been presented to President Michael D. Higgins ahead of events to mark the centenary of the Rebellion this weekend.

Praising the move, the Irish president said it was ‘a magnificent contribution to the 1916 commemorations.’

The Inniskillings Museum said it was ‘honoured’ to loan the flag to the current occupiers of Liberty Hall, Irish trade union SIPTU, to put on display in the building.