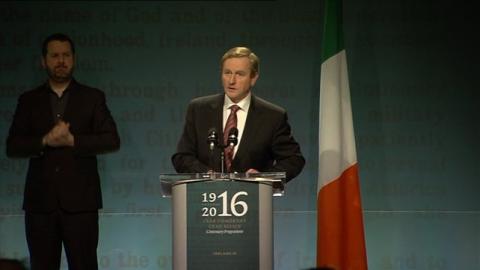 The Irish government have officially launched their programme to mark the centenary of the Easter Rising.

The large scale, year long programme of activity will begin in August 2014 with a re-enactment of the funeral of Jeremiah O'Donovan Rossa, where Patrick Pearse delivered the famous 'Ireland unfree shall never be at peace' oration.

Launched in Dublin on Tuesday night, organisers said: 'The commemoration will be measured and reflective, and will be informed by a full acknowledgement of the complexity of historical events and their legacy.'

A number of themes have been identified including:

• State Ceremonial events, such as ceremonies at the GPO on Easter Sunday and events to highlight the significance of women during the Easter Rising.

• Historical Reflection, with the commissioning of commemorative sculptures and a planting of an avenue of trees in Phoenix Park.

• The Living Language, which will feature lectures, debates and seminars and a range of Irish language arts events.

• Cultural Expression will use the creative community for a series of exhibitions, events and installations. Planning has commenced on a large-scale signature people's event to take place on Easter Monday 2016, telling the story from 1916 to 2016 though music, poetry, dance, theatre and more.

• Community Participation will seek to involve the community and voluntary sector in towns and villages across the country.

• A Global and Diaspora element will include the global Irish family with events in countries across the world.

Speaking at the launch, Taoiseach Enda Kenny described the programme as a 'once in a lifetime invitation' and the people should 'celebrate and have pride in Ireland's independence, and to honour those who gave their lives so that the dream of self-determination could be a reality.'