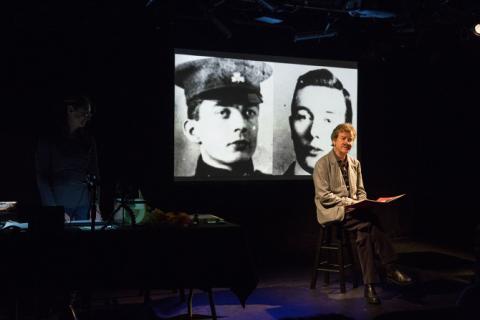 A new multimedia project on the Easter Rising, and First World War, which premiered at the Abbey Theatre in Dublin earlier this year, will open in the Nerve Centre, Derry~Londonderry for an one-off performance next Thursday, June 9.

Twinsome Minds, which is part of the Northern Ireland-wide Creative Centenaries programme, is a multimedia performed talk with text and moving images by Boston College Professors Richard Kearney Sheila Gallagher.

The performance re-imagines a series of micro-narratives surrounding 1916 in Dublin and the First World War battlefields of Belgium. The stories and images of eclipsed history concentrate on ‘twinned’ pairs – family members, neighbours, school friends, lovers – who ended up on opposite sides during this time of great upheaval in British-Irish relations. The various scenes explore crossings of memory and imagination, anecdote and legend, history and myth – as well as loyalty and love.

Twinsome Minds has already toured dozens of venues across the UK, Europe and major US cities. Following its performance in the Nerve Centre it will travel to the Linen Hall Library, Belfast on June 10, as part of the Belfast Book Festival.

Richard Kearney hopes that Northern Ireland audiences will take away “a new sense of the unfinished stories and promises of 1916 as well as a sense of solidarity with both the Irish who died in Dublin during Easter week and in the fields of Flanders wearing British uniforms.”

Through an interplay of storytelling, animations, music and poetry, Twinsome Minds: Recovering 1916 mines what is often lost behind official historical accounts and acts of commemoration, and proposes a transformative work of interpreting the Rising and wider events of 1916 for a new generation.

Sheila Gallagher, an interdisciplinary artist and curator added: “I hope the audience comes away with a more nuanced understanding of 1916 and a more inclusive interpretation of the foundational story of the modern Irish state.

“We hope to offer an imaginative alternative to triumphalist (and boring) military re-enactments and partisan positioning, one that nudges towards a collective empathy.”

Admission to Twinsome Minds in the Nerve Centre is free however registration is essential. To book a place please email info@creativecentenaries.org.

The Creative Centenaries project, led by the Nerve Centre is supported by the Heritage Lottery Fund, Community Relations Council, Department of Culture, Arts and Leisure, Department of Foreign Affairs and Trade, and Derry City and Strabane District Council.