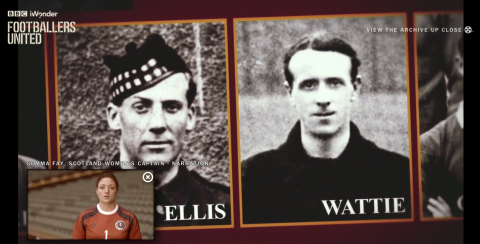 A new interactive drama piece made for the BBC's iWonder site charts the establishment of a battalion of soldiers raised in Scotland during the First World War.

Footballers United tells the true story of a group of footballers who formed their own group and joined the war effort in 1914.

The story also tells the story of the women who were left behind and who worked in munitions factories and formed their own football teams in the absence of men.

The fully interactive website allows viewers to follow the drama on screen while pop-ups offer extra information about individual characters and their setting as well as voiceovers from modern day sportspeople including Gemma Fay, the current Scottish women's captain.

Click here to view the drama and to view archive images, video and audio.