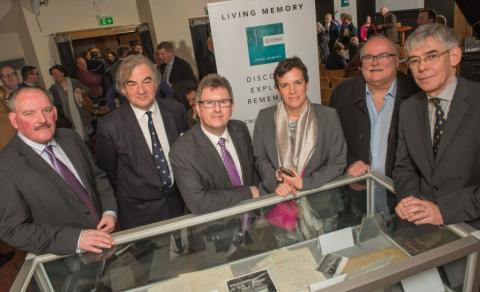 British actor, Hugh Dennis, has teamed up with the Commonwealth War Graves Commission (CWGC) to launch the organisation’s new community initiative to get the British public to visit war graves and discover the stories behind the names of those who gave their lives in the First World War.

The CWGC will launch its UK wide project to remember the forgotten front, the 300,000 war graves and commemorations right here in Britain to mark the centenary of the Battle of the Somme.

The CWGC Living Memory Project aims to encourage UK community groups to discover, explore and remember the war grave heritage on their doorstep. The CWGC is looking for 141 groups, to hold 141 events, to mark the 141 days of the Somme offensive.

Hugh Dennis, Living Memory ambassador for the Commonwealth War Graves Commission, said: 'I have a very personal connection with the First World War as both my grandfathers fought at the Western Front. My great uncles also fought and one, my great uncle Frank, died and is commemorated by the CWGC in Gallipoli, Turkey.

'I’d urge everyone to get involved in this initiative so we never forget those who died during the Great War and are buried and commemorated so close to us on the home front.'

CWGC has graves located in more than 12,000 locations in the UK. The majority of men and women buried or commemorated either died in a British hospital of injuries sustained during the First World War or in the influenza pandemic that followed. They must not be forgotten.

Remembering those buried in CWGC war graves in the UK is a fitting way to mark the Somme centenary.

Funding and creative resources are available to help groups identify a CWGC war grave near where they live. This can be to help towards researching about some of those buried locally and to stage a commemorative event.

Any community group interested can register now by emailing livingmemory@cwgc.org or visiting www.cwgc.org/about-us/cwgc-projects/living-memory.

CWGC Director of External Relations, Colin Kerr, said: 'The overseas work of the Commonwealth War Graves Commission’s is well known, but here in the UK, there is little awareness of the graves and memorials to be found in a more than 12,000 locations that commemorate more than 300,000 Commonwealth war dead of the two world wars.

'We believe this is wrong, and through the Living Memory Project aim to reconnect the British public to their commemorative heritage on their doorstep.

'With the support of the DCMS, the Living Memory Project will encourage more people to discover and visit our war grave sites and remember the war dead in those places from the First and Second World Wars. We want them to share their stories and raise awareness with their wider communities.'

Culture Secretary John Whittingdale added: 'The huge loss of life on the battlefields of the Somme is one of the most poignant reminders of the human sacrifice made during the First World War. But many more who fought in the Somme died when they came home, as a result of their injuries.

'It is this 'forgotten front' that we are honouring through the Living Memory Project - and I hope communities right across the UK will help identify their war graves and help ensure that those extremely brave men are never forgotten.'

Big Ideas Company Managing Director, Virginia Crompton, added: 'This year, we are asking Living Memory groups to help identify Somme casualties buried here and we look forward to seeing them remembered and their graves visited a hundred years on.  We want to thank all the groups from Seaford on the south coast to Belfast and Perth who helped to develop the activities in the Living Memory pack in the autumn. Big Ideas Company is proud to be contributing to such a meaningful project to mark the Somme centenary.'

For more information, contact Samantha Daynes on 01628 507102 or by email at sam.daynes@cwgc.org.