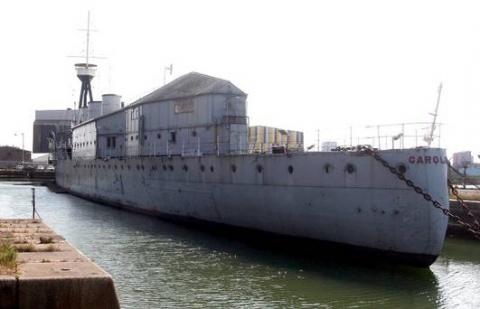 HMS Caroline, one of the last surviving battleships of the First World War, will be transformed into a floating museum and large-scale visitor attraction for Belfast.

Funding from the Heritage Lottery Fund will see the iconic battleship restored in time for the centenary commemorations of the Battle of Jutland, off the coast of Denmark, in 1916.

HMS Caroline sailed ahead of the Royal Navy's Grand Fleet during the battle to establish the location of German ships. Both sides clashed in one of the most significant battles between battleships during the First World War.

The ship, which is currently docked in the Titanic Quarter of Belfast, had been in danger of scrapped ahead of restoration plans.

The National Museum of the Royal Navy (NMRN) will work in conjunction with the Department of Enterprise, Trade and Investment (DETI) to deliver the large scale project.

Captain John Rees from NMRN said: 'The support and help we have received from the Heritage Lottery Fund has been simply first rate and I am thrilled that the funding is now in place and that we can now get on and deliver a world- class attraction.'

Highlights of the visitor attraction will be the ship's bridge containing original compasses and technology of the time, the engine rooms and the living quarters.

Carole Souter, chief executive of HLF, said: 'As we mark the centenary of the First World War, people across the UK are learning more about how it changed millions of lives.

'This Lottery grant will restore and open up HMS Caroline, and enable future generations to explore the incredibly important, yet often lesser known, role played by those who served in the Royal Navy during this momentous conflict.'

Arlene Foster, Enterprise Minister, said: 'HMS Caroline has huge potential as a visitor experience and will contribute to the wider physical regeneration of Titanic Quarter, creating jobs during both the restoration phase, with the work being undertaken in Belfast, and when the ship opens to the public in 2016.

'Today's funding announcement is great news and the restored ship will be a tremendous asset for Belfast and will complement the existing tourist attractions in Titanic Quarter to give more for visitors to see and do.'