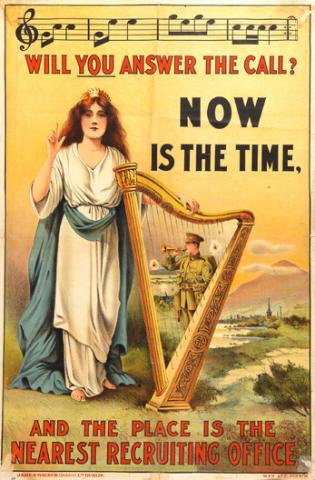 Iconic posters from throughout the First World War will go on display in Ballymena this September.

'Answer The Call', an exhibition made up from the Ulster Museum's collection, will see 40 posters encouraging enlistment and home front activities among others, and will go on display at Mid-Antrim Museum at the Braid.

The unique exhibition follows changes in trends and tone throughout the war and includes some early forms of propaganda.

Dr Vivienne Pollock, Curator of History for National Museums Northern Ireland, said: 'The ‘Answer the Call ‘exhibition was curated to reflect the fascinating shifts in approach during the war.

'At the start of the war, text-based posters were used to encourage enlistment but it was not until October 1914 that a more eye-catching national campaign was set in motion.

'As the war continued, these public appeals increased in their sense of urgency and their methods became more varied and sophisticated.'