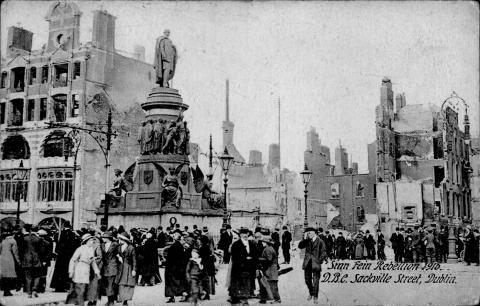 Taoiseach Enda Kenny was present as the Irish government announced plans for the 2016 centenary of the Easter Rising at a ceremony in the GPO.

A military ceremony on Sunday, March 27 will lead events following a remembrance event at Arbour Hill and a state reception for relatives of those who died.

Permanent memorials will also be placed at key locations across the city including Kilmainham Gaol and Richmond Barracks - key locations from throughout the Easter Rising.

Seven concerts honouring the seven signatories of the Proclamation will also take place at the National Concert Hall while a series of remembrance gardens will also be created across the country.

The event is also set to feature talks, exhibitions, seminars and creative and cultural events.

At a launch event, Taoiseach Enda Kenny said: '2016 presents us with a once-in-a-century opportunity to create events of celebration and remembrance that are of value in themselves but that also contribute to a greater sense of who we are, what we want to be as a people, what achievements we aspire to for ourselves and for our children.'

Full details will be published on www.ireland.ie