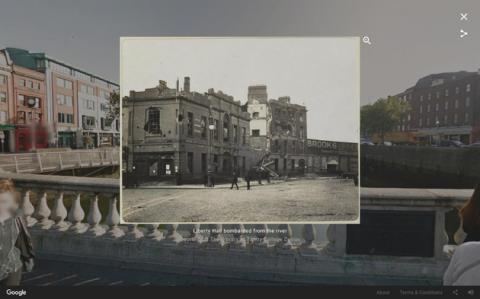 Dublin Rising 1916-2016 features artefacts and unseen photography to highlight the events of 1916, as well as being narrated by Dubliner Colin Farrell.

Using Google technology, users can tour central Dublin locations as they are today and through photos, stories and witness statements, they can relive the sights and sounds of the uprising as they unfolded.

For example, visitors will be able to look at the GPO through today’s lens to how it stood 100 years ago in the aftermath of the Rising, destroyed by shellfire.

One key arterfact in the project is Joseph Plunkett's journal, provided by the National Library of Ireland.

Capturing the drama and intensity of the fight for the GPO, visitors will be able to relive the event first hand.

Another poignant relic is the notice of the rebel surrender signed by Pádraig Pearse on 20 April 1916.

“Growing up in Dublin, the events of 1916 are a key part of our schooling and culture and I’m glad now that anyone around the world can learn more about it and see why it had such an impact on modern-day Ireland just by picking up their phone or computer,” Farrell explained.

The virtual tour is part of a collaboration between Google, the National Library of Ireland, Military Archives, Glasnevin Cemetery Museum, the Abbey Theatre, the Royal Irish Academy and Trinity College.