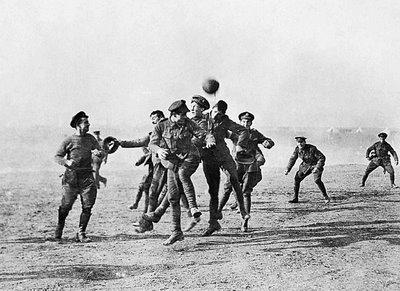 The Premier League, Football League and The FA have joined forces with the British Council to create Football Remembers, a huge national commemoration supported by The Duke of Cambridge, that will mark this year’s centenary of the Christmas Truce – one of the most iconic moments of the First World War.

All Premier League and Football League sides, as well all grassroots level teams, will mark the centenary of the famous truce in the lead up to December 2014, allowing a a new generation of young people to learn about what took place on Christmas Day 1914 in Flanders.

A 'Football Remembers' education pack will be sent to more than 30,000 schools across the UK through the British Council. It includes resources to help children learn about the Truce – including eye-witness accounts, photos, drawings and letters from soldiers, some of which have never been published before.

The Duke of Cambridge – President of The FA – is also backing another unique Football Remembers project. Schools and Football Academies are being asked to design a memorial to the football played during the Truce. The winning design will be chosen by The Duke and Arsenal and England forward Theo Walcott and will be formally unveiled in December.

HRH, The Duke of Cambridge, said: “The British Council, together with The FA, Premier League and Football League, have put together a tremendous resource for use in the classroom and at home. It promises to be a powerful way to engage and educate young people about such an important moment in our history.

"We all grew up with the story of soldiers from both sides putting down their arms on Christmas Day, and it remains wholly relevant today as a message of hope over adversity, even in the bleakest of times."

Research released by the British Council earlier this year confirmed the Christmas Truce as one of the most recognised moments of the First World War – with more than two thirds of UK adults aware of the football matches that took place.