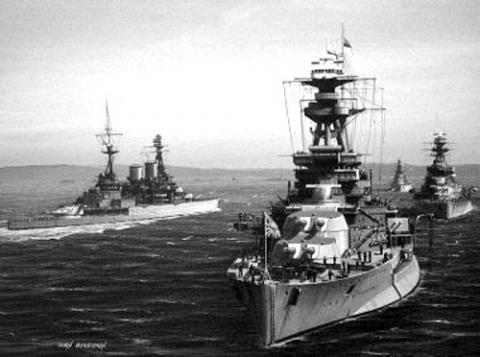 The Jutland Square project, funded by the NIHE Community Cohesion Unit, takes as its canvas a former graffiti black spot on Tennent Street and re-images it into a seven panel art installation created by the Shared History Workshop, using research by Karen O’Rawe.

Included in the project, which has been commissioned by the Spectrum Centre-based City Of Belfast ABF (Army Benevolent Fund) group, will be an exhibition on HMS Caroline, the sole surviving warship from the Battle of Jutland, and a series of community films and lectures about the Battle by Sea Cadet officer Lt Cdr Leslie King.

Exploring the theme of Youth at War, the project will also involve young people from the Greater Shankill area.

Commenting on the project, Pete Bleakley from the Shared History Workshop said, 'Having run the Friends of HMS Caroline campaign back in 2012 it gives me considerable satisfaction to be able to bring the story of the ship and the Battle Of Jutland to a wider audience through this exciting NIHE-funded project.

'Excellent research from History Hub Ulster means that for the first time we have a memorial to all the men from these shores who lost their lives in World War One’s biggest sea battle.'

Karen O’Rawe from History Hub Ulster commented, 'The Jutland Square Project is a timely reminder of the sacrifice of so many men from these shores who fought at sea. The maritime war and the impact of it on our island tends to be overlooked, but as an island nation, keeping the seas safe and the supplies flowing to feed the people of Britain and Ireland was vital.

'Belfast will mark the centenary of the Battle of Jutland with a Commemoration to the Irish Sailor which will officially recognise the contribution of all those in maritime roles on the island of Ireland during the First World War period.'