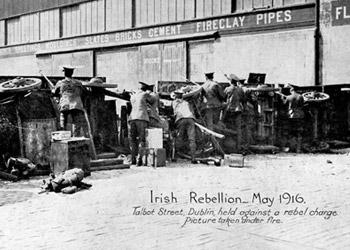 Fianna Fáil have become the fourth organisation in Ireland to officially announce plans to commemorate the Easter Rising in 2016.

A committee under the chairmanship of Éamon Ó Cuív, the grandson of Eamon de Valera, one of the leaders of the Rising, have unveiled early plans for an events and exhibition programme, among other things.

'It would be logical that an organisation that was so connected to the Rising and the War of Independence would commemorate its own history,' said Ó Cuív.

'Of all the political parties, there is the clearest unambiguous connection between the participants and the subsequent party.'

The newly established committee has tasked itself with organising a series of public commemorative events in the build up to 2016 with Fianna Fáil party members asked to collect oral histories from their families who were involved during the revolutionary period.

The party are looking at hosting an exhibition of its own memorabilia connected with the Easter Rising, including that of de Valera.

'We have been receiving feedback from people across Ireland and there is a growing consensus that Fianna Fáil must play a leading role in celebrating the centenary,' he added.

'Our work will be focused on developing material and events that explain and bring to life the reality of the Rising, rather than attempting to leverage this great event for party political advantage.'