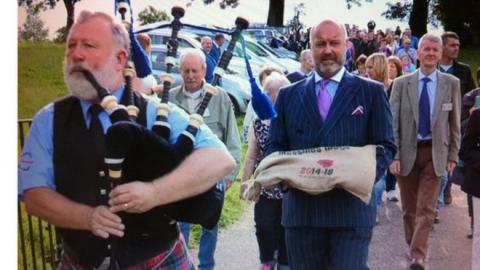 A tree has been planted in Country Fermanagh with soil taken from the Western Front, to mark the role played by Irish soldiers who lived there.

The ceremony on Cleenish Island was in memory of soldiers from the area who fought during the First World War.

Situated in Upper Lough Erne, the island housed 11 men in a project that became known as 'homes for heroes', for ex-servicemen who survived their time during the conflict.

Many of the homes on the island were abandoned and fell into a state of disrepair over time. Relatives of those who lived on the island have now been traced by a local history group.

Together they helped to plant a commemorative oak tree with soil brought back from Messines Ridge - the place where the Irish regiments fought.

'When we first found out the names of the men, they were just names on a page,' said Marion Maxwell from Bellanaleck Local Hisoty Group.

'As we have researched each one I would say one of the things we have found out is that there wasn't one of them who hadn't had some traumatic experience during the war.'

CLICK HERE for more information on the Cleenish Island project.