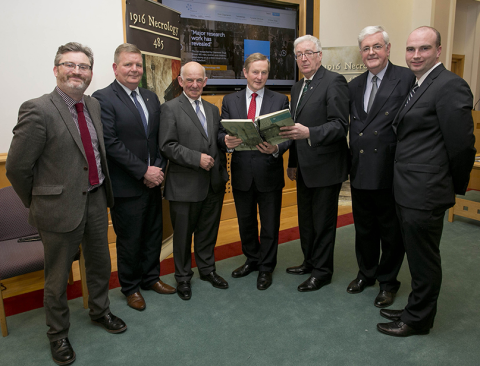 The Taoiseach was on hand recently to launch an online Easter Rising necrology record at Glasnevin Cemetery Museum.

Enda Kenny unveiled the new website listing alongside John Green from the Glasnevin Trust who compiled the necrology containing the names of the 485 people who lost their lives during the 1916 Easter Rising.

The records show all those who were killed during, or as a direct result of, the rebellion. The stats reveal that 54% of the total dead were accounted for as citizens as opposed to the rebel forces or the British Army.

British Army dead account for 26% of those killed and rebel forces amount to 16% of the casualties. The remaining percentage is made up of members of the Dublin metropolitan Police and the Royal Irish Constabulary.

'I want to congratulate Glasnevin Trust for undertaking this important research which will allow us to remember and honour every individual who lost their life during the 1916 Rising,' said Taoiseach Enda Kenny.

'It brings home to the very real impact that the events of Easter 1916 had on ordinary members of the public as well as those directly involved in the Rising itself.'

Additional information on all the names listed in the necrology is held at Glasnevin Cemetery Museum.