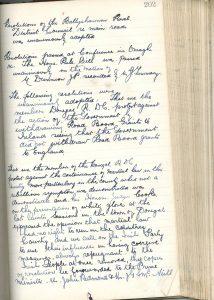 Council minutes taken in Donegal in 1916 are being digitsted and will be made public for the first time.

As part of Donegal County Council’s 1916 Centenary Programme, the Archives Service has digitised the minutes of meetings of its predecessor bodies and those of the Council itself and the archived minutes are now being gradually placed on www.donegalcoco.ie.

Completed at the end of 2016, the minutes cover seven local bodies that were in existence in 1916.

The 1916 minutes include resolutions made by Councils and authorities in response to the Easter Rising and to martial law and imprisonment of those involved in the uprising in the following months, and to the ever evolving political situation at the time across the country, north and south.

The minutes provide a fascinating insight into the initial and sometimes changing viewpoints and stances taken by local political figures in County Donegal in response to the national crisis and the gradual movement towards independence.

Cathaoirleach, Cllr Terence Slowey will launch the digitisation of the 1916 archived minutes on Thursday at 2pm in the County House in Lifford.