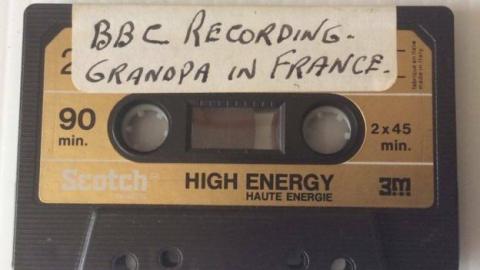 An interview with a Derry soldier who fought at the Battle of the Somme has been uncovered by family after more than 30 years.

Jack Rutherford left the city aged just 16 and a year later found himself fighting on the Western Front in France as part of the Machine Gun Coprs unit.

He conducted an interview with the BBC in 1980s where he talked about his experiences at the front. Jack would later go on to fight at Ypres and Passchendale and was subsequently wounded during the Battle of Cambrai.

The tape has remained unheard for the last 33 years until family recently re-discovered its existence ahead of this week's Somme anniversary.

During the recording, Jack reveals some of his personal experiences at the front including the horrors of war and the cameradie amongst the men.

'The trenches in the winter were terrible. There's no one in this world who'll ever know what the first world war soldier went through,' said Jack.

'You got food but it was just a cup of tea and a bit of bread, maybe the odd bit of stew. I remember one night lying in the dugout and trying to see who could fill the matchbox first with lice.

'There was always somebody injured sometime through the day or through the night. As a matter of fact, I remember burying a couple myself. We had to do it at night because it couldn't be done during the day because of the Germans.'

'I wasn't long in the battle, we went over at a quarter to eight in the morning and I wasn't five yards before I got the bullet in my thigh.

'I was taken to the clearance station and then to hospital. On the battlefield the sights I saw - men with their legs off and holding their legs.'