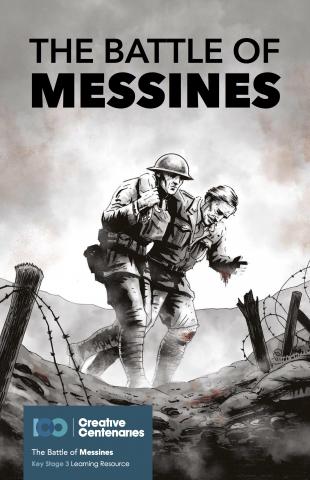 The Nerve Centre’s Creative Centenaries project has produced a new graphic novel on the Battle of Messines, told through the experiences of real life characters.

The Battle of Messines began on June 7, 1917, almost one year on from the beginning of the Somme campaign.

Men from the 36th (Ulster) and 16th (Irish) Divisions, made up largely of unionists or nationalists, fought alongside each other for the first time during the First World War.

The new graphic novel, illustrated by Derry artist David Campbell, follows the experiences of Ballymoney man John Meeke and the Irish MP Willie Redmond, who fought for the 36th and 16th Divisions respectively.

Meeke, a stretcher bearer in the battle, administered aid to Redmond who had been shot and injured shortly after the attack began. Redmond was removed from the battlefield but later died from his injuries. Meeke was awarded the Military Medal for his bravery.

The Battle of Messines graphic novel looks at the impact of the attack through the eyes of both men, including how modern warfare tactics such as tanks and placing explosives deep under German lines were used effectively for the first time.

The resource has been funded by the Department for Communities and the Irish Government’s Department of Foreign Affairs and Trade and produced in partnership with the Public Record Office of Northern Ireland (PRONI).

David Lewis, Director of Communications at the Nerve Centre, said: 'The resource is the latest in a series of graphic novels produced by the Nerve Centre exploring key events in Irish history and the First World War.

'They are a fantastic way of getting young people interested in the past and how these events are still having an impact on community relations today.'

The graphic novel is accompanied by an education pack for Key Stage 3 pupils with background information on the battle and the two men as well as suggested digital learning activities for the classroom.

The Nerve Centre has also been involved in producing a 5 minute animation on the Battle of Messines in partnership with the Somme Museum, ahead of an exhibition at the museum later this month.

The animation uses the latest 2.5D techniques to bring to life archive photographs of the 36th (Ulster) and 16th (Irish) Divisions, sourced from the National Library of Ireland, PRONI, Impeial War Museum and others.