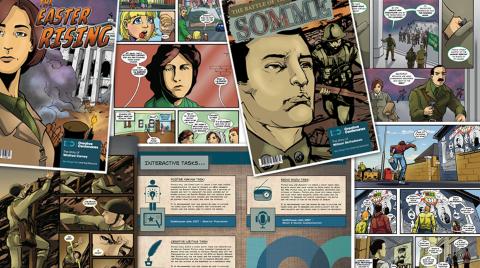 Two graphic novels focussing on real life characters from the Battle of the Somme and the Easter Rising are now available to download and view from the Creative Centenaries website.

Bangor born Winifred Carney and Lurgan's William McFadzean take centre stage in the two stories, produced in conjunction with Uproar Comics, which aim to show the reality of the time.

As the personal secretary to James Connolly, Winifred Carney was one of the few women to remain in the GPO throughout the Easter Rising and was subsequently arrested for her role in the uprising.

William McFadzean was one of the first men from Ulster to die at the Battle of the Somme, sacrificing his life to save that of others. He was posthumously awarded the Victoria Cross for his bravery.

The two comic book stories have been designed and developed with an education pack for use at a Key Stage Two and Three level with background information, maps, a glossary and interactive learning tasks all built it.

Both stories have also been printed back to back for use within the classroom. For more information and to access hard copies of the graphic novel, email: n.kerr@nervecentre.org