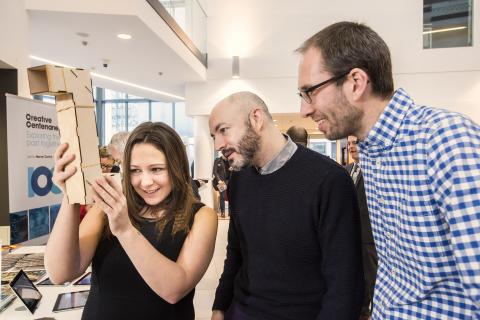 A large-scale cultural heritage programme exploring key events in the Decade of Centenaries, including the Easter Rising and Battle of the Somme, was launched by Creative Centenaries today (March 1) in Belfast.

The Creative Centenaries programme, led by the Nerve Centre in Derry~Londonderry, is a hub for information and resources around the Decade of Centenaries, and throughout 2016 will help to shine a light on some of the key centenaries through creative, artistic and cultural approaches.

The programme launch saw the announcement of dozens of events across film, music, drama, talks, lectures, conferences, family days and more. The work of key heritage organisations is also highlighted through the programme, including plans by National Museums Northern Ireland, Libraries NI, PRONI, and the Linen Hall Library.

Supported by the Heritage Lottery Fund (HLF), the Creative Centenaries programme will see the launch of major exhibitions in the Tower Museum in Derry~Londonderry running from April - November and at the Ulster Museum, Belfast, from June - September 2016.

An outreach strand will use creativity and new digital technologies to engage thousands of young people and adults, with free workshops in schools and community settings.

Paul Mullan, Head of HLF Northern Ireland, said: 'Past events within the Decade of Centenaries still have huge importance for us today, shaping our understanding of ourselves, our communities and our future.  It is with thanks to National Lottery players that we can support these exciting plans to revisit our history, using new and exciting techniques that will interest and inspire a wide range of audiences, and we are delighted to be involved.'

Peter Osborne, Chairperson Community Relations Council said: 'An important focus for CRC’s work in recent years has been on supporting new ways to engage with commemoration to ensure that the region’s divided past does not undermine our ability to live well together in the future. Through its Community Relation and Cultural Diversity Small Grant, Media and Publication Grant Schemes CRC is supporting a range of projects - drama, animations, research, teaching resources, lectures, debates and workshops that allow people of all ages and backgrounds to explore the dramatic decade, 1912-1922, and how it has shaped the region.

'Therefore we are delighted that the Creative Centenaries is being launched today as a hub collecting information about the diverse range and breadth of activities and events being organised in this highly significant centenary year. The educational resources hosted on the site have been developed to make us curious, to encourage debate and discussion for use in the community as well as in  schools, youth centres and educational establishments.'

The programme will also have a specific outreach strand targeting Urban Village areas in Belfast and Derry~Londonderry. The project will deliver digital skills training workshops using a range of award-winning innovative resources around the Decade of Centenaries including curriculum-linked graphic novels, iBooks on the events of 1916, and new 2.5D animations on the Easter Rising and Battle of the Somme.

David Lewis, Director of Communications and Digital Content at the Nerve Centre, said: 'We are delighted to be launching the Creative Centenaries 2016 programme which gives a flavour of how the region’s creative and cultural industries are playing a key role in capturing people’s imaginations, telling new stories, and exploring multiple interpretations of the events of 1916.

'The aim of Creative Centenaries is to open up opportunities for debate, discussion and exploration of events such as the Easter Rising and Battle of the Somme, in an inclusive, respectful way.'

For more information on the Creative Centenaries project and how to get involved, regularly visit www.creativecentenaries.org.