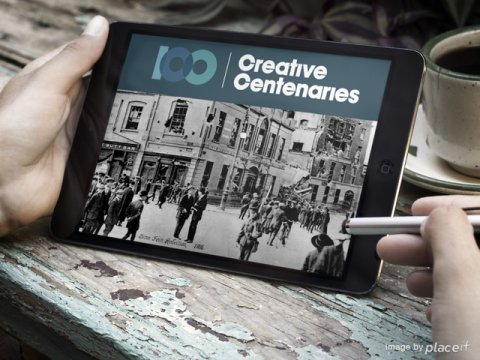 A series of free events exploring the role of Northern Ireland’s creative sector in marking and commemorating the Decade of Centenaries will take place later this month in Belfast and Derry~Londonderry.

The first conference, on Tuesday, March 25, in partnership with the Linen Hall Library, will explore how digital resources – such as digitised collections and archives, virtual exhibitions, films and mobile apps – can be used in creative ways to explore and commemorate centenaries and anniversaries.

Guest speakers include Luke Smith, digital lead for the First World War Centenary at Imperial War Museum, London; and Mark Duncan, director of Century Ireland, an online historical newspaper hosted by RTÉ and produced by a team of researchers from Boston College.

Participants will also be able to get hands-on with the latest iPad technology with a ‘show-and-tell’ session on the latest digital resources developed as part of the project, including: iBooks on the 1916 Easter Rising and Battle of the Somme (Nerve Centre), comic books (Uproar Comics), 3D animations (Whitenoise), and films from the Northern Ireland Digital Film Archive (NI Screen).

In the City Factory Gallery, Derry~Londonderry on March 31, a host of renowned artists will discuss how communities and artists can work together to develop meaningful and engaging ways of taking part in the Decade of Centenaries.

Keynote speaker is Jenny Waldman, director of 14-18 NOW, a Lottery-funded project that aims to build on the many artistic responses to the First Word War – from poetry and visual art to music and film – and will feature contemporary artists from a range of disciplines. Waldman was previously creative producer of the London 2012 Cultural Olympiad, accompanying the Olympic and Paralympic Games.

As part of the conference attendees will enjoy a private tour of the BT Portrait of a City exhibition, The Glass Album exhibition by its curator Declan Sheehan, a reading from Jennifer Johnston’s poignant World War 1 novel How Many Miles to Babylon?, and a short performance by Carol Moore from the thought-provoking suffragette drama Shrieking Sisters.

David Lewis, director of communications and digital content at Nerve Centre, said: ‘Northern Ireland’s Decade of Centenaries is now in its third year, with the 100th anniversary of the beginning of the First World War.

'As the events being remembered take on a truly international dimension, interest in them has grown significantly. With a strong line-up of guest speakers and case studies we will turn the focus on how, as artists and cultural organisations, we can be creative in remembering and commemorating the events of 100 years ago.’

Registration for both conferences is now open via the Nerve Centre website.