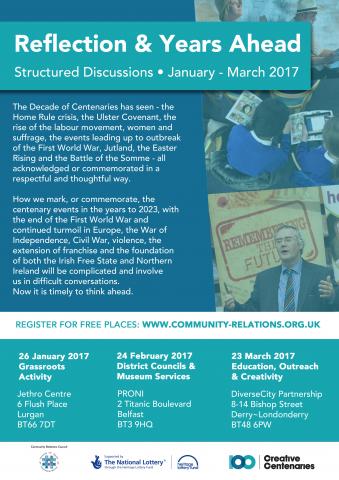 The Community Relations Council have announced a series of workshops for early 2017 to look at forthcoming anniversaries in the Decade of Centenaries.

So far the Decade of Centenaries has seen the Home Rule crisis, the Ulster Covenant, the rise of the labour movement, women and suffrage, the events leading up to outbreak of the First World War, Jutland, the Easter Rising and the Battle of the Somme – all acknowledged or commemorated in a respectful and thoughtful way.

How we mark, or commemorate the centenary events in the years to 2023, with the end of the First World War and continued turmoil in Europe, the War of Independence, Civil War, violence, the extension of franchise and the foundation of both the Irish Free State and Northern Ireland will be complicated and involve us in difficult conversations.

Three sessions will take place from January - March, including session of Grassroots Activity, District Councils and Museum Services and Education, Outreach and Creativity.

Each session begins with registration at 9.30am and concludes at 1pm with lunch and networking.

CLICK HERE to register for this or any of the dates.