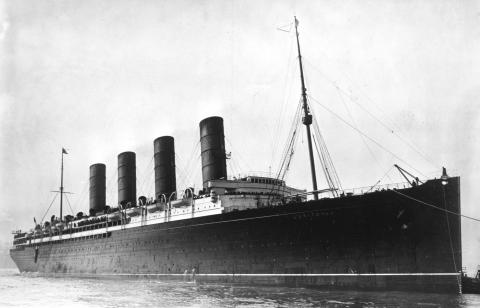 The sinking of the Lusitania will be commemorated with a series of events in the County Cork town of Cobh beginning in February.

The passenger liner famously sunk off the coast of Ireland when it was torpedoed by a German U-boat on May 7, 1915, causing the deaths of almost 1,200 passengers and crew.

It had been making its way to Liverpool from New York on its final voyage.

Leading up to the centenary of the ship's sinking in May, the town of Cobh will host a range of activities beginning on February 1 with a recital of the bells of St Coleman's Cathedral followed by a reading from local schoolchildren of the names of victims buried in the Old Church Cemetery.

Over the advancing weeks other events include a Lusitania themed St Patrick's Parade, a reopening of the Cobh Museum with a Lusitania exhibition and a free lecture series throughout the month of April.

On May 7, the centenary of the ship's sinking, the Cunard liner Queen Victoria will begin a 'Lusitania Remembered' voyage at which President Michael D. Higgins will be in attendance. The evening will complete with a range of musical performances and a parade of boats symbolising the return of rescue ships.

Click here for a full programme of information on the centenary.