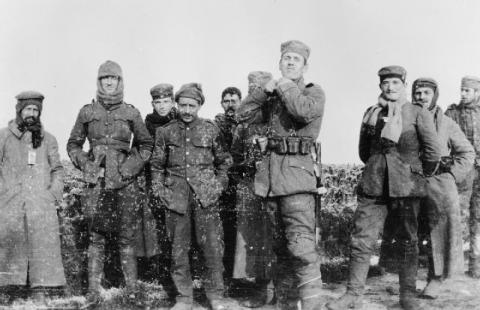 A football team from Ballyclare formed my veterans of the First World War will play a German team to commemorate the Christmas truce of 1914.

On December 24, 1914, soldiers from both sides of the war are said to have emerged from their trenches to swap stories, goodwill and play a game of football.

Irish League Championship side Ballyclare Comrades were established when three returning survivors thought a football team would help spirits following the war. Just three months after the 1918 Armistice, a team made up of members from the 12th Royal Irish Rifles came into being.

To commemorate the centenary of the Christmas Truce, a team from Dorsten in Germany will travel to Ballyclare to take part in a football match.

The idea was conceived by Rev Robert Bell and will include musical performances by the Ballyclare Male Choir and Fr Eugene O'Hagan from The Priests who will sing a verse of Silent Night in German.

The event will take place on Saturday 20 December from 2pm - 4pm.