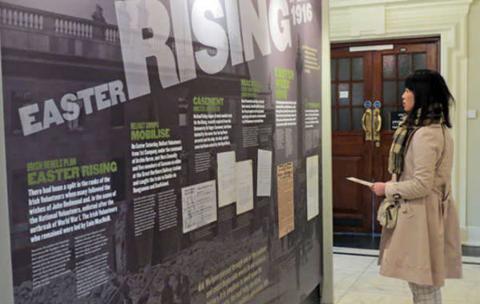 A new exhibition has opened at Belfast City Hall with the aim to 'shine a spotlight' on key events in Ireland’s history including the Easter Rising and Battle of the Somme.

As part of Belfast City Council’s ‘Decade of Centenaries’ programme, the ‘Belfast: Reflections on 1916’ exhibition will be on display until the end of August, and will examine all the seminal events of 1916.

The interactive exhibition will cover other key moments of 1916 including the Battle of Jutland, the role of women, recipients of the Victoria Cross, and the human stories behind the historic events of that year.

Also included in the installation are Creative Centenaries developed iBooks and animations exploring 1916.

Lord Mayor Arder Carson said: 'Our Decade of Centenaries programme has been running since 2012 and this year we mark 2016, one of the most significant years of that decade.

'As well as examining some of the key events of 1916, the exhibition also shines a light on the human stories of that year - the role of women, the growth of cinema, and the impact of the Easter Rising and First World War on local lives.'

More events are planned throughout the year including a large, outdoor exhibition in the grounds of City Hall this summer. The ‘Fields of Battle; Lands of Peace’ photo exhibition depicting the battlefields of WW1 will be on display from July 15 until the end of August.

There will also be lectures on the Easter Rising and Battle of Jutland; a presentation on the Battle of the Somme and its impact on Belfast communities; and a conference on the theme of ‘Belfast, a hundred years on from 1916: how do we make a fresh start?’.