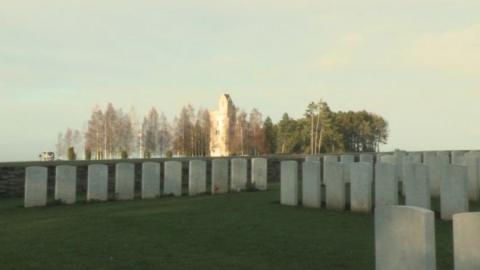 The Department of Education and the Department for Communities have announced funding for a 'Battlefields' project to allow schoolchildren to visit First World War sites in Europe.

£500,000 of funding has been set aside to allow two Year 10 pupils and a teacher from each post-primary school in Northern Ireland to make the trip.

The project is now open and schools are invited to express an interest with the first trips scheduled to take place in June 2017.

Education Minister Peter Weir hopes the scheme will help students to learn about the 'realities of war' and encouraged schools from all sectors to take part.

'This scheme will be open to children from all backgrounds and is a unique opportunity to learn about our past. Millions of people lost their lives during the First World War and that must never be forgotten,' said the Education Minister.

'That is why I believe it is so important that our young people should be encouraged to remember those who died.'

Pupils will have the opportunity to visit sites in Belgium and France, including the Somme, where thousands of soldiers from Ireland fought in 1916.

Communities Minister Paul Givan added that the scheme would allow pupils to develop a better understanding of the sacrifices made.

'They will be able to visit places of significance to our community memory including cemeteries, memorials, battle remains and museums,' said the Communities Minister.

'It also gives young people in Northern Ireland the same opportunity as schools in England who are already receiving financial support to visit the battlefields.'

The scheme is being administered by the Education Authority who are writing to all schools to invite them to express an interest.