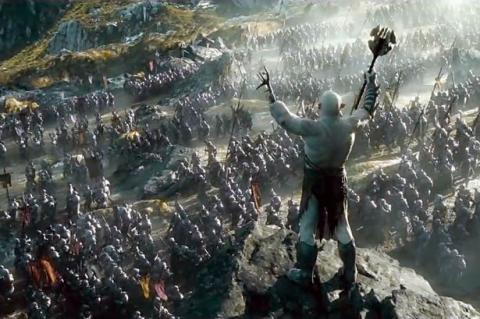 Ahead of the release of The Hobbit: The Battle of the Five Armies, a comparison has been made that suggests author JRR Tolkien got his inspiration for the story from the battlefields of the Somme where he fought during the First World War.

The widespread death and destruction that Second Lieutenant Tolkien witnessed as a signals officer in the 11th Battalion Lancashire Fusiliers is said to have haunted him long after his duty when he resumed work as an academic at Oxford.

'Tolkien told his children about the horrors of being in a gas attack and summed up life in the trenches as an 'animal horror', said John Garth, author of a biography on Tolkien.

'I think he wrote The Hobbit and The Lord of the Rings partly because he was trying to exercise the trauma he suffered. It was part of the healing process.'

The Hobbit: The Battle fo the Five Armies will be released next week and culminates in a large scale battle.

'The whole world he created was ­influenced by what he saw,' added John.

'Just look at the Dead Marshes in The Lord of the Rings, where dead warriors lie in water staring upwards. That’s real. It is Tolkien’s own memory of life on the front line.

'By autumn 1916 the battlefield at the Somme was covered with corpses. When it flooded there were bodies floating in shell holes. As his battalion advanced they’d take German trenches that were full of bodies.'

The new Hobbit film will be released in cinemas on December 17th.