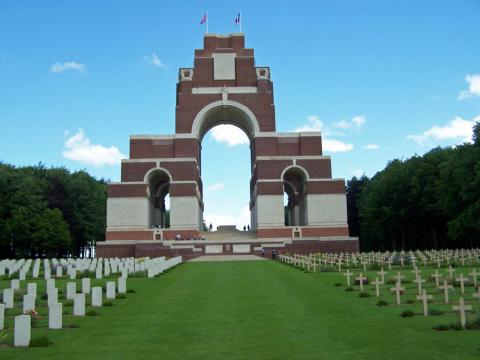 A new app has been developed by the Commonwealth War Graves Commission to help visitors locate the names of soldiers on the Thiepval Memorial and read some of their personal stories.

The monument remembers more than 72,000 men of the British and South African forces whose bodies were never recovered after the Allied offensive on the Somme in 1916.

The new app from CWGC will allow visitors to locate a soldier's name, read more than 900 personal soldiers' stories, explore interesting facts by theme, read historical information on the Battle of the Somme and view a timeline of casualties over the conflict.

Carl Liversage, Head of External Engagement for the CWGC in Western Europe said: 'As we prepare to commemorate the centenary of the Battle of The Somme this new app allows you to search for all the casualties we commemorate on the Thiepval Memorial.

'Not only will you be able to view a detailed plan of the memorial but you can pin point a name on the panel, read personal stories and discover interesting facts.'