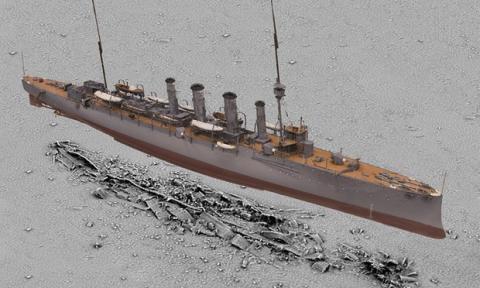 A warship that took part in the Battle of Jutland has been digitally recreated as a 3D image.

The original appearance of HMS Falmouth has been superimposed on the wreck which still lies on the seabed off the Yorkshire coast after being attacked by a German torpedo for the third time.

Falmouth is the only significant Royal Navy wreck from the Battle of Jutland that lies in English waters. Created by Historic England, the 3D image has been (seen above) has been created based on recent survey work of the wreck and is superimposed over an image of its current state.

HMS Falmouth was one of 250 ships that fought during the largest naval battle of the First World War off the Danish coast in May 1916. Over 8,000 people were killed during the battle.

The ship fought with Admiral Beattie’s battle cruiser fleet, and torpedoed the German cruiser Lutzow, sustaining only minor damage to its superstructure.

On 19 August it was sailing south with the fleet when it was hit by two torpedoes fired by a German submarine and the following day was torpedoed again.

Wayne Cocroft, a historian at Historic England, said: 'When people think of the first world war, they think of the Somme and the trenches.'

'They forget that you could stand on many British beaches, look out to sea, and see the war happening before your eyes. We hope that by recreating this almost forgotten ship, we will remind people of this very important but now largely invisible aspect of the war.'

HMS Caroline in Belfast is the only surviving ship from the Battle of Jutland and has been restored for this centenary year, opening as a museum this past May to mark the anniversary of the battle.