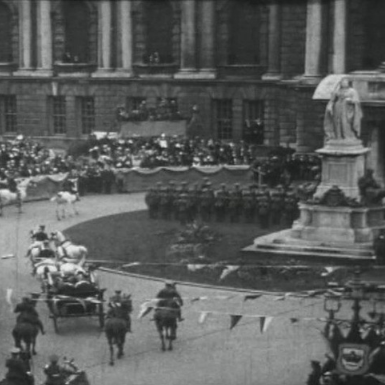 The state opening of the new Northern Ireland parliament in 1921. © British Pathé.

The centenary of Northern Ireland is contested. In December 1920 when the Government of Ireland Act partitioned the island of Ireland into two separate entities, few could have imagined that partition would continue to shape northern political identities into the 21st century.

Whether one marks, acknowledges, remembers, celebrates or boycotts the centenary, Northern Ireland has had a turbulent history from which no single narrative can be drawn.

The purpose of the Historical Advisory Panel is to consider the history of Northern Ireland in all its complexity.

It has been appointed by the UK Government as part of the Northern Ireland centenary project to deal with the ‘historic elements' surrounding its creation.

The panellists are drawn from diverse backgrounds and their recommendations are strictly independent from governmental influence. At an individual level they have divergent views on explaining aspects of Northern Ireland’s history, but they all agree that the Panel’s responsibility is to encourage an inclusive, holistic, and ‘messy’ history of Northern Ireland in order to aid understanding of the lived experiences of a wide variety of groups and individuals who lived through the tumultuous events of one hundred years ago.

The Panel will engage with both familiar and less familiar events pertinent to the early years of the region’s history.

From the foundation of labour and rise of trade unionism to the campaign for suffrage – particularly the enfranchisement of women – several forms of politics exercised its inhabitants in the decades before and after 1921, many of which complemented divides over the constitutional question but also created allegiances on other bases.

Questions regarding society, the economy and culture are also part of the holistic way in which the Panel is exploring the centenary, which is being considered in wider contexts and longer chronologies both within the island of Ireland and UK but also within other important frameworks including the former British Empire and European Union.

Several projects are underway to bring these histories to light. Creative Centenaries contextualises various aspects of Northern Ireland’s past and bring to the fore voices of individuals and groups across the last one hundred years.

Through different types of published content, the website explores the centenary from a wide variety of perspectives, republishing contemporary news stories and primary evidence in conjunction with explanatory pieces on particular topics.

Another project involves the creation of a centenary book, which will produce a collection of academic essays on various aspects of Northern Ireland over the last one hundred years.

A physical exhibition in Belfast and London are planned if Covid permits. In conjunction with the Northern Ireland Office and History Teachers’ Association, the Panel is supporting an essay-writing competition whereby schoolchildren can delve deeper into the historical background of the period.

Importantly, the Panel believes that the centenary is a time when archives pertinent to N. Ireland’s creation and establishment are made available for future researchers and they are working with PRONI to ensure that collections that are previously closed or which are difficult to find are made publicly accessible.

The history of Northern Ireland will elicit different views, emotions and levels of engagement, which the Panel recognises. We have no desire to be prescriptive as to how individuals or communities remember the past but we do hope that the public will take an interest in our work. To that end, the Panel held a public discussion about the centenary on 4 May, which was moderated by Tara Mills. The aim of this talk was for people to learn more about what we do and to discuss aspects of the region's history. A full recording is available on the Northern Ireland Office YouTube channel. Edited recordings are also available on the Northern Ireland Office Centenary website Our Story in the Making, and to download on Vimeo.

We do hope that our work will yield greater understanding of the events of one hundred years ago. Understanding does not imply acceptance or agreement, and we fully expect the public to have a wide variety of views on the content we produce just as the Panel itself has different views on extrapolating conclusions from evidence.

This, we believe, is a healthy part of historical enquiry. Accommodating diverse historical experiences and divergent views on the past might go some way to better understanding the centenary that we are now living through.

The state opening of the new Northern Ireland parliament in 1921. © British Pathé.