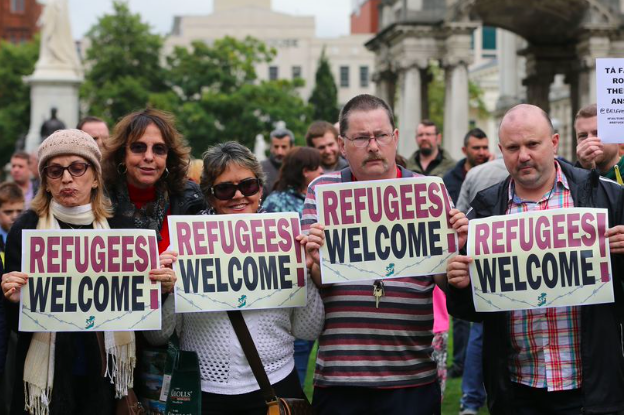 You might have heard this one before. A Jewish tourist near one of Belfast’s sectarian interfaces is grabbed by a masked man, who aggressively asks him: “are you a Protestant or a Catholic?” When the tourist replies that he is a Jew, his bemused assailant attempts to clarify: “but are you a Protestant Jew or a Catholic Jew?” This often-told joke encapsulates the binary division that has characterised Northern Ireland’s 100 years of existence. The assumption that Northern Ireland has always been a place of ‘two communities’ – Nationalist and Unionist, Catholic and Protestant – has marginalised those who are not from either ‘side’. As a result, Northern Ireland’s numerous immigrant and minority ethnic populations have been side-lined by noisy sectarian acrimony. By 1921, Northern Ireland already had two established immigrant populations. Since the late nineteenth-century, Jews from Germany and eastern Europe, as well as Italians from Frosinone province near Rome, lived and worked in Belfast. Otto Jaffe, a German-born Jewish immigrant, served two terms as Lord Mayor of Belfast in the late 1890s and early 1900s, while the majority of Belfast Jews worked as drapers. Italian immigrants overwhelmingly entered the catering trade, opening ice cream cafés and fish and chip shops. These institutions proved immensely popular. In 1922, over thirty Italian ice cream saloons were dotted around Belfast, with dozens more trading across the region.

The 1920s also saw the arrival of migrants from the Indian subcontinent. Mohammed Din, Belfast’s first recorded South Asian immigrant, settled there in approximately 1929. Like most of his peers, Din worked as a door-to-door clothing salesman and lived in a Belfast boarding house with several other South Asian men. The Indian community was religiously diverse, incorporating Muslims, Hindus and Sikhs. As they became more prosperous, South Asian immigrants abandoned door-to-door sales work in favour of more lucrative and stable shops and factories. Finally, Chinese immigrants from Hong Kong arrived from the early 1960s, establishing restaurants and takeaways that have since become Northern Irish culinary staples. The Chinese community quickly became the region’s largest ethnic minority, numbering several thousand by the 1990s.

By its fiftieth anniversary in 1971, Northern Ireland was home to thousands of immigrants and minority ethnic people. Still, most white residents did not think of Northern Ireland as ethnically diverse. With the Troubles brewing, entrenched images of polarisation between nationalists and unionists left immigrant communities largely ignored. The invisibility of ethnic minorities left them lacking legal support or protection. In the 1960s and 1970s, the UK government passed a series of Race Relations Acts, formally outlawing racial discrimination. The Acts covered England, Scotland and Wales, but not Northern Ireland. The latter was exempt because, according to the Unionist government at Stormont, Northern Ireland did not have the ‘colour problem’ that afflicted Great Britain. Stormont ministers claimed that Northern Ireland’s minority ethnic population was so low as to be insignificant, confidently asserting that ‘racial discrimination does not, in fact, exist’. Before 1997, when racial protection law was belatedly introduced to Northern Ireland, it was perfectly legal to refuse a job, a service or a house to someone purely on account of their race. Although it was rarely explicit, such discrimination occurred in covert, intangible forms, especially in the job market, where minority ethnic people were frequently overlooked for jobs in favour of less qualified white candidates, usually those who shared a religious background with the employer.

Inevitably, immigrant communities were affected by the everyday violence of the Troubles. Although they were seldom deliberately targeted, dozens of migrant-owned businesses were destroyed by paramilitary bombs. A handful were killed in sectarian crossfire, civilian bystanders to a conflict in which they had no stake. In some ways, immigrants’ neutrality was advantageous. Being from neither ‘side’, immigrants stayed out of sectarian disputes and were largely ignored by militant loyalists and republicans. Indian salesmen were routinely waved through army checkpoints while white Catholics and Protestants were forensically searched. But neutrality had its limits. Sectarian conflict heightened hostility and suspicion towards outsiders, particularly in close-knit urban estates. While media interest in Northern Ireland focused on conflict between the ‘two communities’, instances of racism often fell under the radar. Restaurant and takeaway staff were at particular risk from racist abuse and violence, working late into the night serving rowdy, drunken customers. In 1996, a twenty-eight-year-old Chinese takeaway owner called Simon Tang was beaten with a baseball bat outside his business in Carrickfergus and left to die in the street from horrific injuries. Soon after Tang’s murder, Belfast’s Chinese Welfare Association (CWA) set up a taskforce to support victims of hate crime, many of whom felt neglected by the police.

Sectarian polarisation also posed a more fundamental question: was it even possible to remain neutral? Basic amenities such as education and housing were structured along Catholic-Protestant lines. If an Indian family sent their children to a local Protestant school, they might find themselves labelled ‘Hindu-Protestant’. A Chinese family in a Catholic neighbourhood could be dubbed ‘Chinese-Catholic’, even if they had never set foot in a church. These absurd labels were real life examples of the joke that we began with, highlighting the difficulties facing newcomers in a binary, polarised society.

Since the peace process, immigration has dramatically increased. In 2011, 28,760 minority ethnic people lived in Northern Ireland, up from an estimated 4,000–6,000 in 1995. Yet, the historical presence of immigrants and ethnic minorities for over a hundred years showcases how Northern Ireland has always been more than a society of just ‘two communities’.