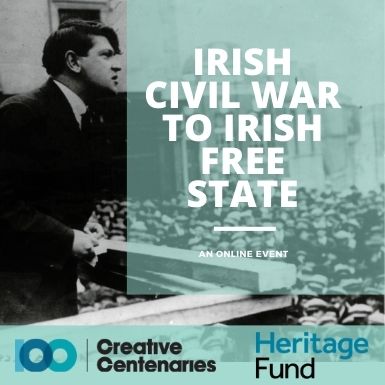 Creative Centenaries is pleased to announce the latest event in a series exploring the events surrounding the partition of Ireland.

Irish Civil War to Irish Free State is an online panel discussion exploring post Anglo-Irish Treaty Ireland, from the split in the Irish Nationalist movement to guerrilla war and the establishment of the country that would eventually be known as the Irish Republic.

Dr Síobhra Aiken will explore how revolutionaries anticipated the outbreak of civil war from before the treaty debates and how these anticipations shaped understanding of the events to come. Her first monograph, Spiritual Wounds: Trauma, Testimony and the Irish Civil War, is forthcoming from Irish Academic Press in early 2022.

In 2021, Liz was appointed Historian in Residence for Dublin South County Council for the Decade of Centenaries. She also works as a Researcher for the History Show on RTE Radio and lectures at Champlain College Dublin. Liz was a Historical Consultant for the Hyatt Centric: The Liberties hotel and the new Custom House Visitor Centre. She was a Curatorial Assistant in RTE, specialising in researching the Easter Rising and a tour guide for many years in Kilmainham Gaol.

In 2018 Liz was a recipient of the Lord Mayor’s Award for her contribution to history. She is also the co-organiser of the annual conference on the burning of the Custom House in May1921.

Professor Henry Patterson is emeritus professor of politics at Ulster University and the author of several books including; Ireland’s Violent Frontier and The Politics of Illusion: A Political History of the IRA. His present research looks at the social and political history of Unionism in North Down from the Home Rule period to the Troubles.

Chair for the evening, Dr Adrian Grant, is branch president of the University and College Union (UCU) branch at Ulster University. On a number of dates throughout February (including the 16th) he will be on strike in an effort to ensure equality, job security, and dignity in work and retirement are secured for higher education workers across the UK. Adrian is the author of the Derry volume in the Irish Revolution series of books exploring the events of 1912-23 in each county of Ireland. He is also the author of Irish socialist republicanism, 1909-36 and has researched extensively on the interactions of radical left-wing politics and Irish republicanism. More recently his research has centred on urban history, with a focus on the impacts of housing regeneration on people and communities after the Second World War.

This is a free online event. Zoom links will be emailed to attendees prior to the event.