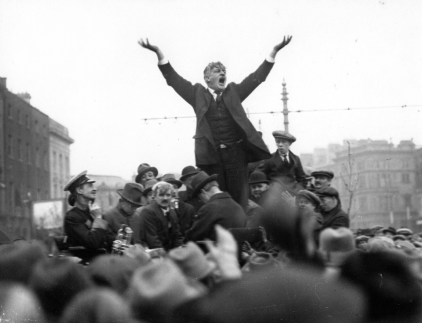 Dangerous and harsh conditions at work helped to spark the development of mass trade unionism amongst workers in Ireland at the end of the nineteenth century. Up to that point trade unions had mainly consisted of skilled, well-paid workers.

Across Europe in the 1890s and early 1900s unskilled workers began to organise and demand change. The ‘Dublin Lock-Out’ was a major industrial dispute between 20,000 workers and 300 employers, marking a watershed in Irish labour history.

It was masterminded by Liverpool dock worker Jim Larkin, who established the Irish Transport and General Workers Union and who had previous experience in the trade union movement when he helped with the 1907 Belfast Dock Strike.

The most notorious day of the Dublin Lock-Out was 31 August 1913 when Larkin, wearing a top hat and fake beard, addressed a rally from the balcony of a hotel on O’Connell Street. Dublin police stormed the crowd, killing two people in the process. Employees eventually had to return to work in early 1914 to avoid starvation.