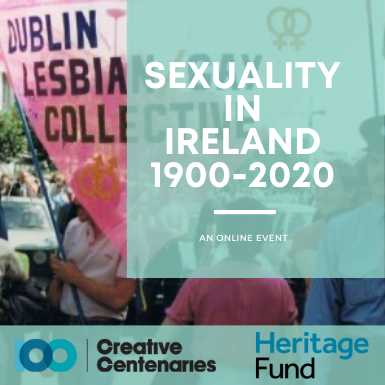 Sexuality in Ireland 1900-2020 is the first in a series of online events which will explore the impact of the events surrounding the partition of Ireland on life today.

Dr Hulme is a Senior Lecturer at the School of History at Queen's University Belfast, currently leading the Queer Northern Ireland: Sexuality before Liberation project, funded by the AHRC. Dr Hulme’s research into LGBTQ+ history in Northern Ireland has grown from his interest in cities and the popular past, and he is an active supporter of LGBTQ+ equality. Dr Hulme sits on the committee of the LGBTQ+ Staff Network at Queen’s University Belfast.

Joining Dr Hulme in speaking on 20th century Irish LGBTQ+ history will be author of Roger Casement – The Black Diaries, with a Study of his Background, Sexuality, and Irish Political Life (3rd Edition, 2019), Jeffrey Dudgeon (MBE). Previously sitting as an Ulster Unionist Party councillor for Belfast City Council, he is best known for bringing the case Dudgeon v United Kingdom to the European Court of Human Rights; challenging Northern Ireland’s laws criminalising sexual acts. Jeffrey will be exploring the history of sexuality in Ireland between 1960s-1990s.

Rounding off the history of the past century, University College Dublin Teaching Fellow Dr Páraic Kerrigan and Here NI coordinator for the LGBT Heritage Project, Mary Ellen Campbell will explore the contemporary history of LGBTQ+ groups in Ireland. Mary Ellen will also delve into the crucial work of the HERe NI organisation, dedicated to the support of lesbian and bisexual women in Northern Ireland.

This project is supported by the National Lottery Shared Heritage Fund.