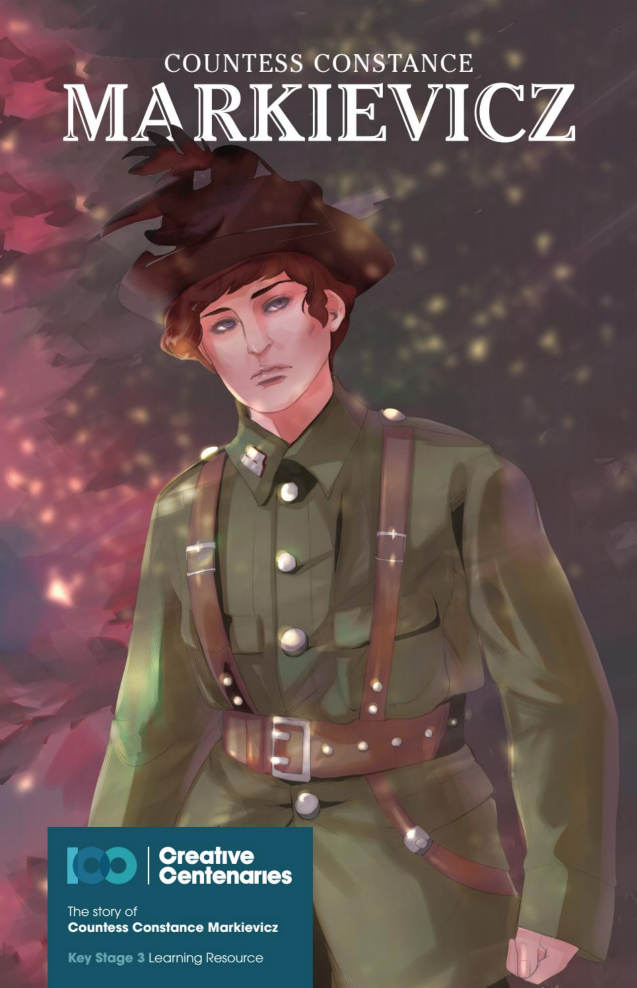 A graphic novel looking at the life of Countess Constance Markievicz from her early days of campaigning through conflict and revolution to politics.

The first female MP elected to the House of Commons and the first female cabinet minister in western Europe, Countess Markievicz was one of the most remarkable public figures of her time.

Constance Georgine Gore-Booth was born in 1868, the eldest of five children. Her father, Henry Gore-Booth, owned the Lissadell estate in Sligo, where she grew up. Life could not have been more comfortable. She rode horses, hunted and wanted for nothing.

But Constance was not like most other women of her class. Even as a child she was concerned with the welfare of her father’s tenants and when she was older she began to look outside her privileged existence. At 25 she went to London to study art at the highly respected Slade School of Art and when she returned to Sligo, she helped set up a local women’s suffrage group with her sister Eva.

In 1900, while studying art in Paris, she married a fellow student, Count Casimir Markievicz, who was Polish. A widower with a young son, he and Constance had a daughter Maeve.

Her life changed dramatically in 1908, when she attended her first Sinn Féin meeting. She also joined Inghinidhe na hÉireann (Daughters of Ireland) and helped found Bean na hÉireann (Woman of Ireland), the first women’s nationalist journal in Ireland. She formed Fianna Éireann, a republican version of the Boy Scouts.

She worked tirelessly to help the strikers’ families during the Dublin Lockout of 1913. She joined Connolly’s Irish Citizen Army during the failed strike and marched with the army during the Easter Rising of 1916, when she was part of the group that briefly held St Stephen’s Green.

After the failure of the Rising she was sentenced to death, which was later commuted to a life sentence. The following year an amnesty saw the release of all Republican prisoners and she returned to a hero’s welcome in Dublin.

She lost her seat in 1922 but was re-elected the next year. She held her seat until her death in 1927. Over 300,000 people lined the streets of Dublin for her funeral, testimony to the great affection the people held for her.

This resource was developed with the support of the Department for Communities in partnership with the Public Record Office of Northern Ireland.